There is a certain amount of silliness in endurance sports. Sprinters have it simple. You train hard for a 50 or 100 yard dash. The race is over in 5-45 seconds depending on your sport.  You strive for peak velocity and maintain it through the finish. Bam! No mas senor!

The pinnacle of this sort of silliness is climbing a mountain. You can't make it any harder to get to the top or make the top any farther away. When you get there, the space aliens who've been testing your resolve beam you up into their interstellar banana boat and off you go.

This past weekend we did our own sort of extreme event. It's called the American Triple-T. It's really a quadruple T but that name does not alliterate quite as well. You can imagine what rhymes with 'ruple'.  It's poople.  The Quadruple Poople wouldn't draw athletic people from all across the country. Or maybe it would, but the wrong type of people. You understand?

Now that I'm finished busting on this sort of thing, we had a lot of fun. The Triple T races add up to about an Ironman over a weekend of racing. The trick is coming back for more after the previous. You've got to steel yourself to get back into a cold pond and climb up some 500 foot ascents. It requires hammer balls. If you are of a timid disposition - if don't have hammer balls - you should not go to this event. It will chew you up.

We went with two couple friends who we hung out with all weekend. Having a good group around you to share in the experience makes it all the more enjoyable, So make some buddies and knock yourselves out! 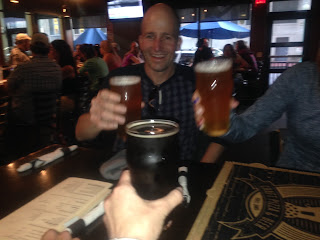 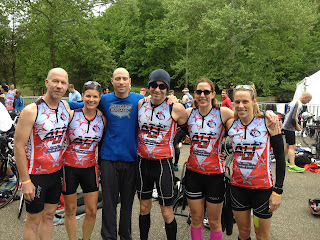 Bri and I trained well through the spring. I didn't want to do this event without being fit. Neither did she. This would be her likely one and only attempt at an Ironman-ish distance race. My goal was to see her to the finish, keep her happy and healthy, and hopefully not feel too beat up after. 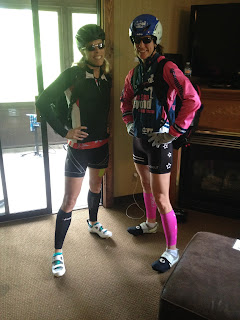 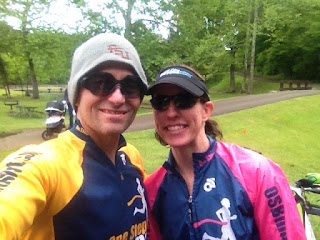 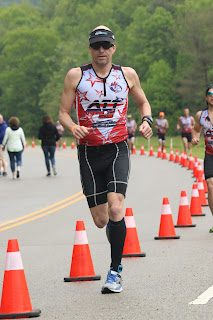 Me running at some point 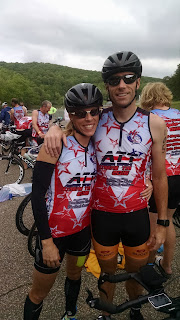 Race #4. Sunday morning Half-Iron.  2800+ feet elevation on the bike, double the run to 13.1 and 1000 feet. This is the doozy.  If you went too hard on Saturday, or came into the weekend poorly trained, or are prone to cracking up mentally, today is your day to suck donkey kong.  I was both well trained and hadn't done anything terribly hard to this point so felt fine, other than that I was about to do a half-Ironman after doing two olympic distance triathlons the day before. Completely normal, right. Not utterly batshit at all. Keep telling yourself that.

And it was friggin' cold. The water temp was not higher than 62. The air was colder at 48 or so.  The people around us were colder, less happy, less chipper. I wonder why. Oh yes, we're all idiots and we're having a giant idiot party. Yay. 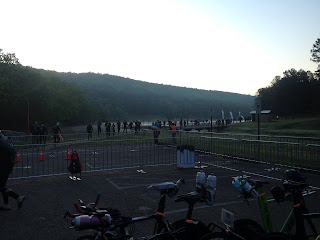 Penguins on the march

Bri and I were mumbling and stumbling for the first 10 miles of the bike.  After this we warmed up and got going. Talk about a slow start. I could talk about my normalized power, but your eyes would glaze over, so I'll skip it.  We had a nice ride and got it done with just a couple stops to pee, take pictures, and adjust things. 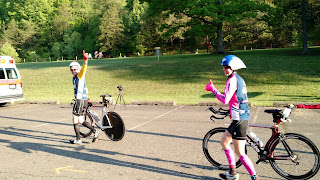 Pretending to be excited for another ride 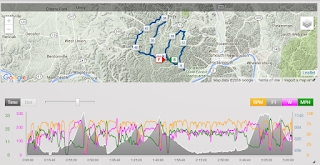 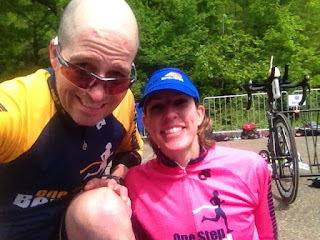 Still smiling after that bike ride!

We held up on the run and Bri was a tough cookie.  She dropped the hammer for the last 2 miles of the run and we cracked 6-hr for the half with a 1:56 or so run split.  In the end we finished as the 4th coed team. This gets you a slap on the back and a cookie. Congrats!

But seriously, they give you some nice swag. A finisher's jacket. A cool medal. A lifetime of memories. And so on. 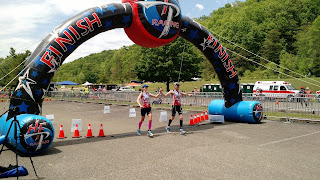 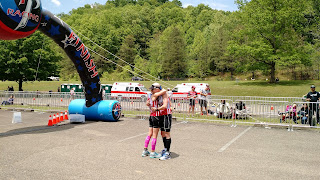 In the end, our combined team time was 24:53.  That's 24 hours and 53 minutes. In a weekend. Divide by two for individual glory numbers. The winning coed team did around 20:40 and the first individual was about 10 hours.

So, in summary, if you're a lunatic triathlete that likes to share horror stories with other lunatic triathletes, check it out. Otherwise, stick with your normal long distance events and tell yourself you're not missing anything. 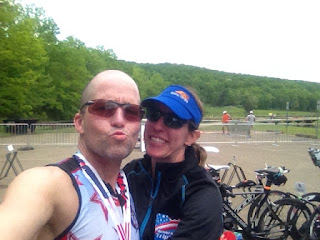 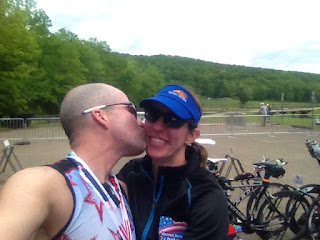 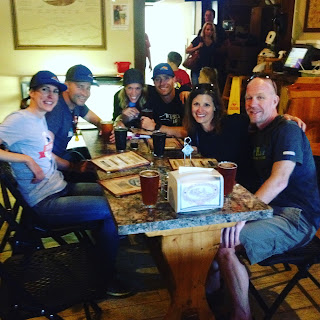 Posted by martygaal at 8:18 AM