"Let's run a marathon with at least half of it in direct sunlight in the hottest part of the day!"

"And let's do it on a day with record setting temperatures!"

"Oh, Bob," congratulatory backslap, "you are a genius!"

"And let's get some high humidity in there too!"

"I have an even more greater idea!"

"Let's swim 2.4 miles and bike 116 miles before we run that marathon in the hottest part of the day!"

Ironman Pukeanooga is another notch in the old Stupid Shit I Have Toughed Out To Prove My Worth utility belt. You have already read the reports, but it was hot. Not just un-seasonally warm.  The average high temp on this day is 80 degrees. We went right past warm, into hot, and blasted into scorching, with an unexpected record high of 97 degrees.

More than 25% of the starting field dropped out during the race or didn't make the time cutoffs. Simply put, it was awful.

But enough complaining. Everyone had to deal with the same conditions. At least it wasn't windy!

I was as well prepared as I could get. I stayed focused, in the moment, on top of my game, on top of my efforts, my power; my inner demons quieted by the oppressive silence of my robotic like focus on performance and execution. I was a stormtrooper of determination and well rehearsed action. I was a Jedi Master of fluid, nutrition, sodium, and putting ice in my hat like a motherf"cking Yoda.

The Sun laughed and shit down a rain of sunbeams. I melted like a cheap plastic toy under the happy assault of a curious child with a can of aerosol and a lighter. Flame on! Done!

But that was just the last few miles. I held it together well through about mile 15. So let's start at the beginning.

The swim is down river with a mild current. I swung towards the middle to avoid the crowds and gain clear water. I swam at a medium to medium fast effort and won the Roka age group swim split award for men 45-49. Yay!  Exited the swim feeling like I didn't work too hard. Perfect. Robot. Focus. Laser beams. Sunshine.  46:11.

The bike ride is 115.8 miles or so according to most GPS units. My goal was to ease into the first few miles then hold a steady effort at about 70% of my power threshold. I finished just slightly higher than that with a 72% average and 74% normalized power - variability index of 1.03.  My TSS for the ride was 292 which is just a tick on the high side of what I was shooting for.  Effort wise: completely harmless. Didn't push a thing and felt smooth throughout the ride. Had a mostly clear ride after shaking out a few drafters in the first 30 miles. Very mild winds if anything.

The bike was the best kind of bike - completely uneventful. One slowdown due to a very cautious driver ahead of me. No mechanicals. No issues. Almost no other competitors nearby. Wonderful, steady, boring.

Could feel the heat coming down for the last 12 miles. Big stretch of open highway. Heat sink. Stay focused. Want to take my helmet off. Stay focused. Laserbeams. Robots. Ice in my veins.

Onto the run. I changed into an old OSB running top I had cut short to keep as much skin aerated as possible. In hot/humid conditions I sweat like a pig and excrete a ton of minerals doing so. My achilles heel. I didn't want skintight material soaked with sweat boiling me any more than necessary.

Blah blah blah blah. I ran around 9 minute pace with 1 minute or so walk breaks at each aid station. I loaded up with ice in my hat, 2 cups of fluids, the occasional gel or clif blok. I was taking in 4-5 oz of cola or Gatorade Endurance at each stop + additional water. About 40 ounces an hour. Still not enough. I had a thermolyte salt tab every 20-30 minutes. Still not enough. ~600mg sodium/hr or more. I grabbed some base salt from the course and started to supplement with that. I had a 10 ounce bottle to sip on in between stations. Not enough. I held "steady" through mile 15 with minimal walk breaks.

My logic had been to load up on the bike with everything so that I could avoid stressing my stomach on the run with all this junk.

Not enough. :) Someone forgot to tell me the temperature would break records and the humidity would reach eighty per-bleeping-cent. Gahh!

Let me describe the course for a moment.

The first four miles of each of the two loops are on a large exposed highway.  No shade. Boiling hot. I ran through here around 2pm the first time and 4pm the second time. The second time was hotter than the first. I started to crumble. I could feel my body overheating. It was excruciating. I began to suffer from heat exhaustion. Not the mental "it's sooo hot, waaah" but the rapid pulse, dizzy, beginnings of nausea and twinges of muscle cramps. This is indicative of electrolye depletion, let alone dehydration.

So began the slow rundown to a run-walk, then a walk-run-walk, then a miserable dizzy walk. I continued to attempt to refuel at the aid stations and use the base salt as a supplement. I had run out of my thermolyte tabs. I saw my wife and son at ~mile 19. I wanted to stop and hug them and go home with them. It was still so - bloody - hot. I had six more miles. If I could run-walk I'd be done in an hour 15. I stayed focused. I started to run over the bridge. I started to puke. Loud, awful, painful retching. I threw up everything from the last 2-3 miles.  I caught my breath and started to run again.

We hit the hill. I tried to take some more salt and drink. I walked a little. I had to sit down and throw up again. My legs cramped while vomiting. I stood outside myself for a moment and saw a pathetic creature lying in the dirt, puking and grabbing his legs. I stood up and got over the hill. I sat down to drink some more water and take a short rest break.

I walked again. I threw up again. I tried to run. Total leg cramps. I wanted to cry.

3 more miles. 20 minutes on a good day. I walked. Aid station. I got a cup of ice water and sat down. 2 miles to go. I sat and drank my ice water and watched the runners go by. I didn't throw up. I sat for 13 minutes and didn't care about my time, or my race, or what other racers might think. I thought about getting some of that fluid in my system so I could keep moving. I asked God to let me drink this one f"cking cup of ice water without throwing it up. Please God, I said, let me drink this one stupid cup of water. So I don't pass out and hit my head on the concrete. So I can go home and play with my son. Just this cup. I felt better. I started walking up the hill.

I threw up. I sat down to recover. I started walking again. Maybe some of that fluid got in me, because I felt slightly better. The sun had stopped beating us up and the temps were coming down. I felt OK again. I made it to mile 25. I sucked on two ice cubes along the pedestrian bridge. I was thinking positive. Home stretch.

I threw up. With 25.5 miles down, I had to stop and puke those two ice cubes out.

Like many people, I found the reserves to run through the finish line, a smile plastered on my face. I slapped hands. I absorbed the moment. I stopped to kiss my wife, who had tears of concern in her eyes. I wanted her to know I was OK. I was OK. I finished.

It was my slowest marathon time and slowest Ironman, but I finished. 12:07.11.

In hindsight, if I had to do it again, I would hammer the swim and bike and sit this marathon out. It was really very difficult. I don't mean to make light of those that finish or the effort involved to get to this point, but there are too many fun things in life to spend time intentionally suffering for vanity and glory. 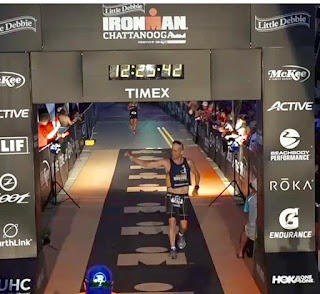 What would I do differently if I had to do it again, for real, if I wanted to do another extreme temperature Ironman?

Get an actual metabolic sweat test done to see how much I really lose. It's way to the high side. More electrolytes on the bike and double or triple my electrolyte intake for the run from the get go. I don't know if my stomach could handle either, and I don't intend to run any 100+ degree, 100 mile bike - 15 mile brick workouts to test it out.

Am I happy with the race?

Yes, despite the narrative above sounding like a horror show, I was pretty happy overall. The conditions that we encountered were my absolute worst case scenario. I do not thrive in extreme conditions. I stayed positive and on task. I still finished in the top 15% of race starters!  The nausea and vomiting could be related to electrolytes, but it could also be that my internal body temperature got too high - 104 is where people start to turn into slow moving zombies. Obviously, that's not really healthy.

I signed up for Ironman Chattanooga because it was supposed to be cooler. Race to your strengths!

Addendum: The following day, the high temperature was 88 degrees with overcast skies in the afternoon. Mother Nature, once again showing her wicked sense of humor.

2017: The Year of Short Races I Don't Have to Think Too Much About.

Chattanooga itself: Awesome. Loved it. Great place to hang out, I'm sure it's a nice place to live. We may check out the 70.3 in May sometime. We stayed at a condo on the river and had a blast on the vacation side of things. 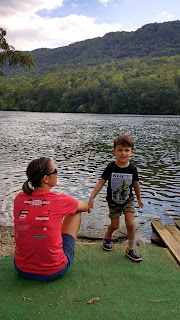 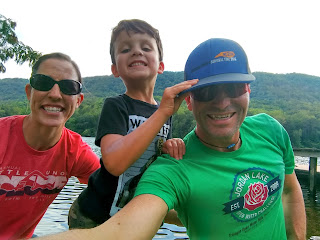 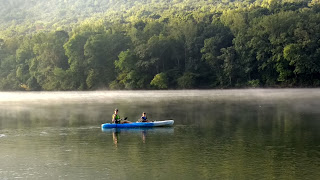 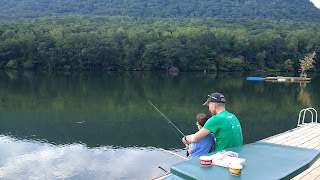 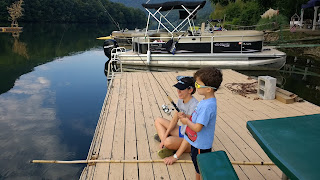 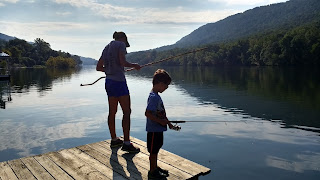 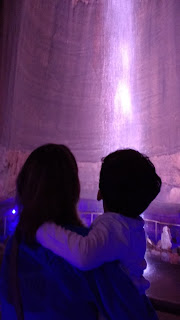 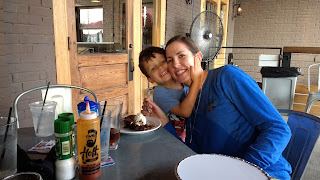 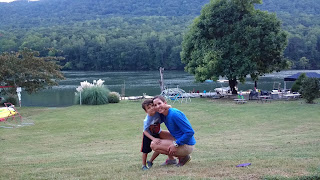 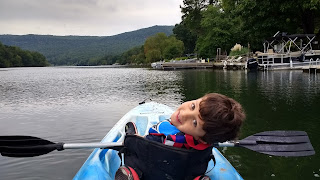 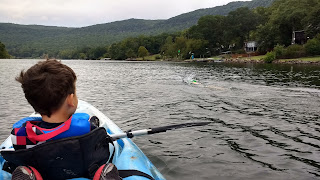 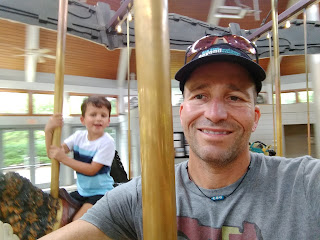 Posted by martygaal at 4:37 PM

Love your positive attitude about what was your worst nightmare. And congratulations on finishing in the top 15 percent! You're amazing!

Congratulations on finishing in the top 15 percent! You're amazing! And your race report is great. Love the sense of humor.

Marty, this was an awesome post and your misery certainly had company. Hats off to you my man for getting it done.