While Bri did the Blue Ridge Relay, Junior Awesome and I entertained ourselves with all sort of activities. 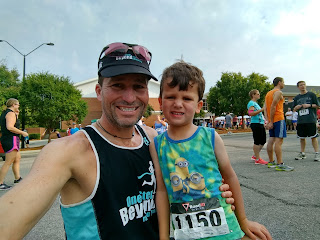 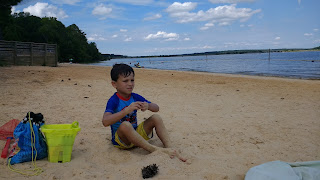 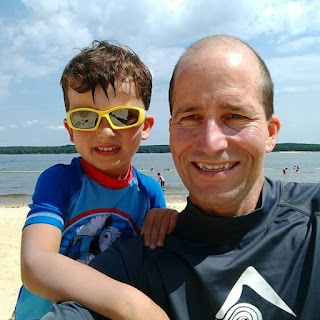 My summer is ending with a bang this season, with Ironman Chattanooga on September 25. I suppose technically speaking, we're kicking off the Fall season with a baboom.  Or something like that. Anyway, it's over Johnny.

The good news: No more long rides in 100 degree heat!  Holy smokes, this has been a warm summer. I wound up doing five 100+ rides this season, with two of them in scorching conditions. The first was a 109 mile local affair that had me spend the last 30 miles sitting upright on my bike limping home.

The second was a 128 mile ride to the coast with three equally disturbed buddies. On that one myself and another rider had to request a 'sit in the shade' break before we succumbed to heat exhaustion. Both rides got into the 105+ heat index range with massive time in direct sunlight.

For those of you who might be interested in the numbers, I managed to get my power threshold (FTP) to about 270 this season from 245 or so at the start.  More could have been done to work on this but in the grand scheme of life, I had other things to do.  For some fun, here's the complete file from the Washington sprint triathlon done the day after this boiling hot ride above.

You can see the steady effort at just about 257 watts with normalized power at 262. I felt pretty good given the long saddle time the day before.  I hopped off the bike in first and got run down by a couple guys to finish third.  It was also hot/humid at this race.

I could go on about all the power info but I spend six days a week doing that with my athletes so I'll forego it here.

The last few days have been spent tapering down to get to IM Chatt feeling rested and ready to go. I do feel good about my fitness and am looking forward to the race. The range of times I might be coming in at are:

swim: 45 minutes to 55 minutes depending on some or no flow from the river.
bike: 5:15 to 5:40 depending on who knows what
run: 3:50 to 4:30 depending on the FRIGGIN SUN.  Right now the forecast is for a high of 90 with a heat index of about 98 in the afternoon. Join me and all of North America in making a chant for some cool weather.

So at the best, I'll squeak in under 10 hours. The worst could be a stumble to the finish, but barring anything catastrophic, I'll cross the line.  Goal one: Finish, Goal two: 10:30, Goal three: sub-10 (potential Kona area).

In other news, we've been having lots of fun in Junior Awesome land. I broke out our Go Pro, which has been sitting in a box in my closet for three years, to capture some moments at the pool.

This past weekend, we had some more fun cheering on Bri and friends at the Rex Wellness Wakefield triathon.  I volunteered to watch some of our friends' kids while everyone raced as they have done the same for us.  Nobody got lost so it all worked out. 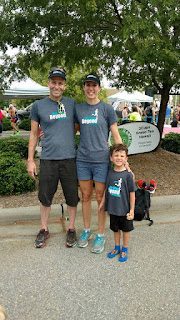 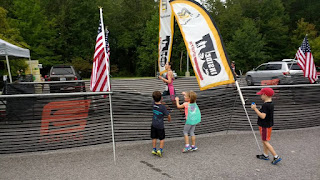 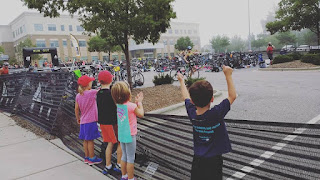 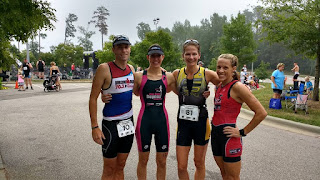 Logan capped the evening off with a 50 yard dash with his buddies and ran across in first place.   I'll add the file when I can figure out how to get files off my phone.