My goal in writing this update is to take more time than the actual Sampson County Supersprint Triathlon did.

The distances are almost perfect for the time-crunched triathlete: 250 yard pool swim, 7 mile bike, and a 2(.2) mile run. If there were a local series of these that took place in open water instead of a pool, I would be all over it.  You get to be a triathlete without all the wear and tear of those silly longer events!  I'm not joking.  Seriously.

It was raining but not chilly, thankfully.  I was in charge of Junior Awesome for the weekend as Bri went out of town to support a couple of our buddies at some ridiculously hard ultra-run called Leatherwood.  It was raining and muddy and cold there.  They had water, Gatorade, and PBR at all the aid stations. Seriously.  I'm not joking.

Our superstar babysitter Miss R arrived on time and played with Junior Awesome all morning, freeing me up to do the triathlon.

Tenacious E and I arrived at the race site in Clinton, 1hr15 away from Cary, with an hour to spare, so we did not have to rush through anything.  I took a leisurely potty break and caught up on my twitter feed.  Did you know most of my best tweets are sent from the toilet?  I'm not joking!  Seriously.

After that I got my transition set up and went for a jog.  I would normally bike for a warm up but did not feel like getting all soaked as it was drizzling.  I probably ran for 13.65 minutes as a warm up and then stretched for 2.3 minutes.   I also plastered Chamois cream all over myself.  Not just my crotch, but my armpits and the backs of my knees as well.  I love the smell of chamois cream in the morning.  Smells like victory.

After I was lubed up, I headed over to the pool.  A nice volunteer was collecting people out front in an orderly fashion and said we couldn't go in to warm up.  I walked to another door and saw about 20 people in the pool warming up.  So I mumbled something about "that guy has my goggles" to the young volunteer standing at that door and headed inside.

I proceeded to swim about 600 yards.  It might be just 500 but was no greater than 650.  2 of these lengths were swum at a faster than leisurely pace; 2 were breaststroke; and 2 were backstrokes.  I also did one length of kicking.  There were 2 other people in my lane. I am so bored right now.  I'm so happy you're still subjecting yourself to this nonsense. Please, please don't stop.

After the warm up I made my way over to where they were lining up swimmers to start off in a time trial fashion.  I was number 9.  At every pool meet, people seed themselves incorrectly.  The website says to enter your estimated 100 meter pace.  Not your best time; not your 50 meter time; not some fantasy lottery combination of numbers.  If you don't enter anything, you start at the back.  I entered 1:05, which is way faster than I can swim these days, but was still seeded 9th.  As we waited for everyone to show up, I realized Tenacious E was not there.  I told Big D, who was starting the swimmers, that the friendly volunteer out front probably still had 20+ of the first 50 swimmers waiting in a cold drizzle, while we were getting ready to get started.  He quickly sent another volunteer to fetch them.  I found this amusing on several levels.  1) the people who followed her orders did not get to warm up 2) they almost did not make it in time and 3) the number 1 fellow was not very fast, nor were 2,3,6, and 8.  4) none of these reasons are funny except that they almost didn't make it in because they were following the rules, which leads me to believe that following the rules all the time is not the best thing you can do, unless the rule is there to keep you safe and warm - which this one clearly was not.

There is only one picture in this update, and you will have to wait for it, wait for it at the end.  It is so awesome.  Don't scroll down!  Don't do it!

So...I started and passed the girl ahead of me, a teenager who let me get by without a hitch.  it was clean waters until I got jammed up behind Tenacious E and the number 1 guy and number 3 guy I believe.  We eventually got past them and swam to the finish together, in perfect synchrony, with our shiny matching outfits.  People cheered loudly, with thunderous applause.

We exited the water.

We ran to our bikes.

We got on the bikes.

We rode the seven miles.  It was super slippery and raining hard for a fair bit.  I was very cautious on the turns but felt pretty good.  I passed 1 girl, slowly pulled away from E, and saw just 2 guys ahead of me.  Both of them are super fit but I did my best to catch them, because that's what we do; we catch the people in front of us, or experience sharp stabs of pain and agony trying.  Just do it.  Nobody ever reaches their goals taking the easy road.  Be the ball, Danny.

I did not catch them, try though I did.  Yay, for it was not to be.

I finished the bike.  I got off my bike.  I ran into transition with my bike.  I took off my helmet.  I put my bike on the rack. I thought about not putting socks on but decided to put them on.  I don't like blisters.  Putting the socks on took about 5 extra seconds.  But I did not get blisters.  Then I put my shoes on.  I was sitting so had to stand back up..  We get the point. Oh. My. God. Shut. Up.

My calves almost cramped running out of transition but I stepped gingerly and they eventually loosened up.  Things went pretty well except for an officer directing me off course for a few seconds; I realized he was wrong and went the right way.  Might have lost 15-20 seconds there.  Kept the effort up to the finish and kicked a bit down the chute.  I did my best to put a look of extreme discomfort on my face as I did this so everyone would know just how hard I worked out there.  I mean, what's the point if you make it look easy?  Pshaw.

I would go on but have other things to do tonight, like cut my toenails.  I'm not joking! Seriously.  My hands are also starting to hurt.  I almost beat the time but won't quite make it unless I come back and edit with a bunch of pictures of strangers or additional motivating quotes like roar like a lion in the heat of the silver moon.  You can check the website to read my splits.  I could type them in here but that would be so over the top self-involved given the inward looking nature of this report already.  They were 3:21 swim, 18:37 bike, 14:47 run.  Uuuh, I didn't mean to do that.  Sorry. Shit.

After it was all said and done I finished 3rd overall by just 0.4 seconds ahead of 4th.  I officially apologize to the 4th place guy for being the douche ahead of you that gets this ridiculously large 2nd overall loser trophy. 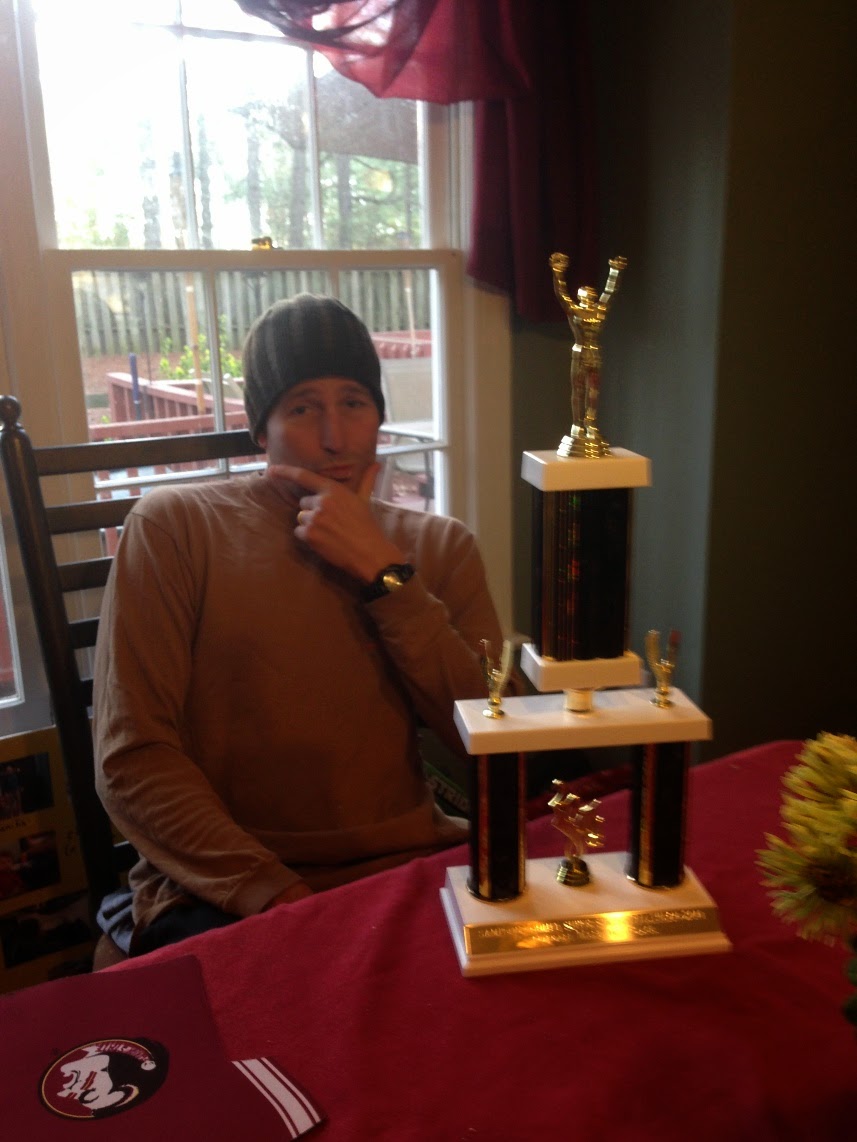 I mean, this thing is brilliant, but I am a grown man with a 2 year old in the house.  He already tried to open it to put his cars inside the 2nd level garage (this should be obvious to you, if it's not you have no children or no imagination). It's going in the guest bathroom, next to the potty where I can see it all the time, with Bri's All Star trophies from high school. I'm not joking. That is how we roll up in this joint.

what the hell did i just read.

Most awesome picture ever! Really, if that was the 3rd place trophy, what was 1st place?

That's one of the funniest things I've read in a long time! And congratulations on the trophy!