It has been a couple of years since I made it to the Battle at Buckhorn triathlon in Wilson.  It is a great venue and course, not too far away from Cary/Raleigh, and they award the overall winners with a kick ass belt buckle each year.  I was fortunate/in-shape/lucky no one had better races for 3 seasons and won the race in 2009, 10, and 11.  A former athlete of mine built a terrific wooden box for the belt buckles and they are on permanent display at Casa de Gaal.

This year was a little different.  I had some really good fitness going into the early season and Raleigh half, but it has slowly dissipated as my life has been consumed by the endless tasks that come along with buying a new house, financing a new house, getting an old house ready for sale, and so on.  Sort of the straw that breaks the camels back when you're already at maximum capacity on work/life/family/training balance, so training for me is the one that takes a backseat these days.

We were on vacation for a week at the Jersey shore with family as well, so what do you expect, 2 hr 5AM tempo rides before the family is up?  Yes, definitely a good idea - once upon a time, but not right now.

STFU and give us the race report, right? 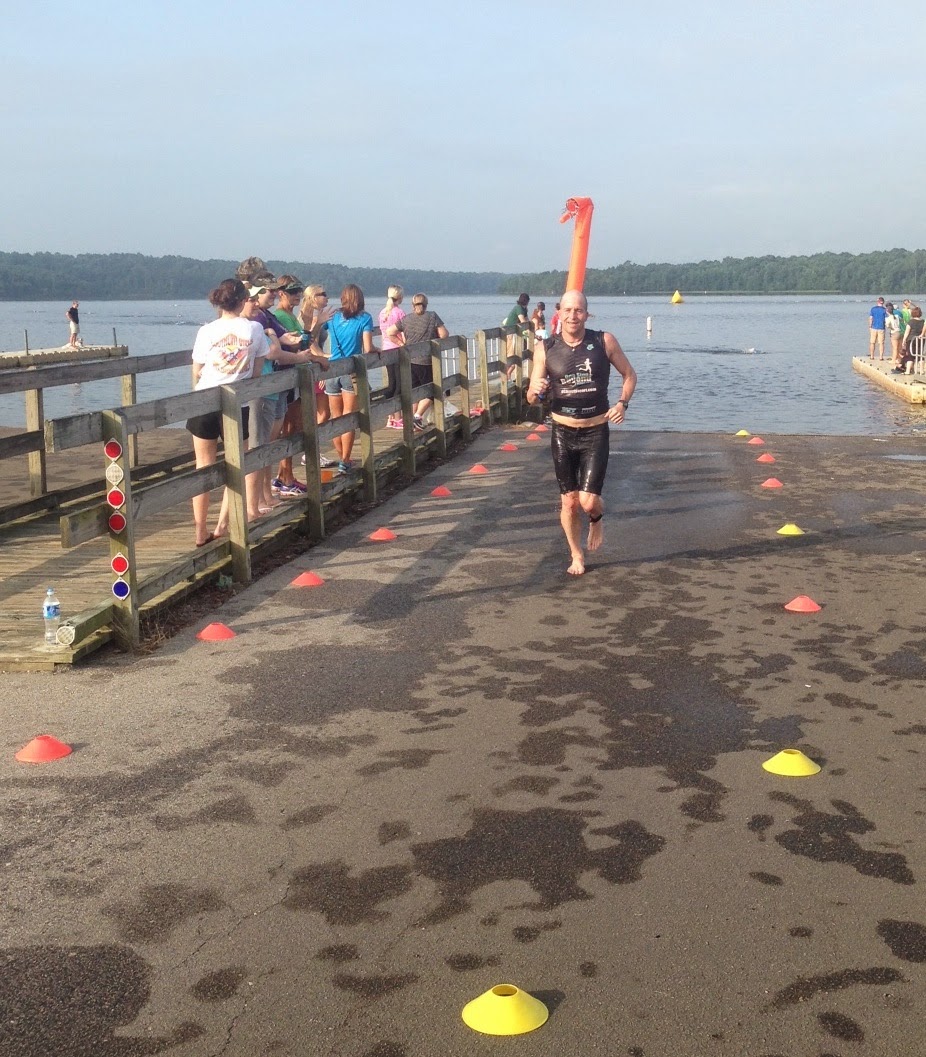 I felt ok but not great on the swim and came out of the water 2nd about 20 seconds behind eventual winner Dave Williams of Triangle Multisport.  Dave would go on to break my course record by about 20 seconds, which is awesome, because I wasn't aware I had a course record.

On the way out I ran into this guy. 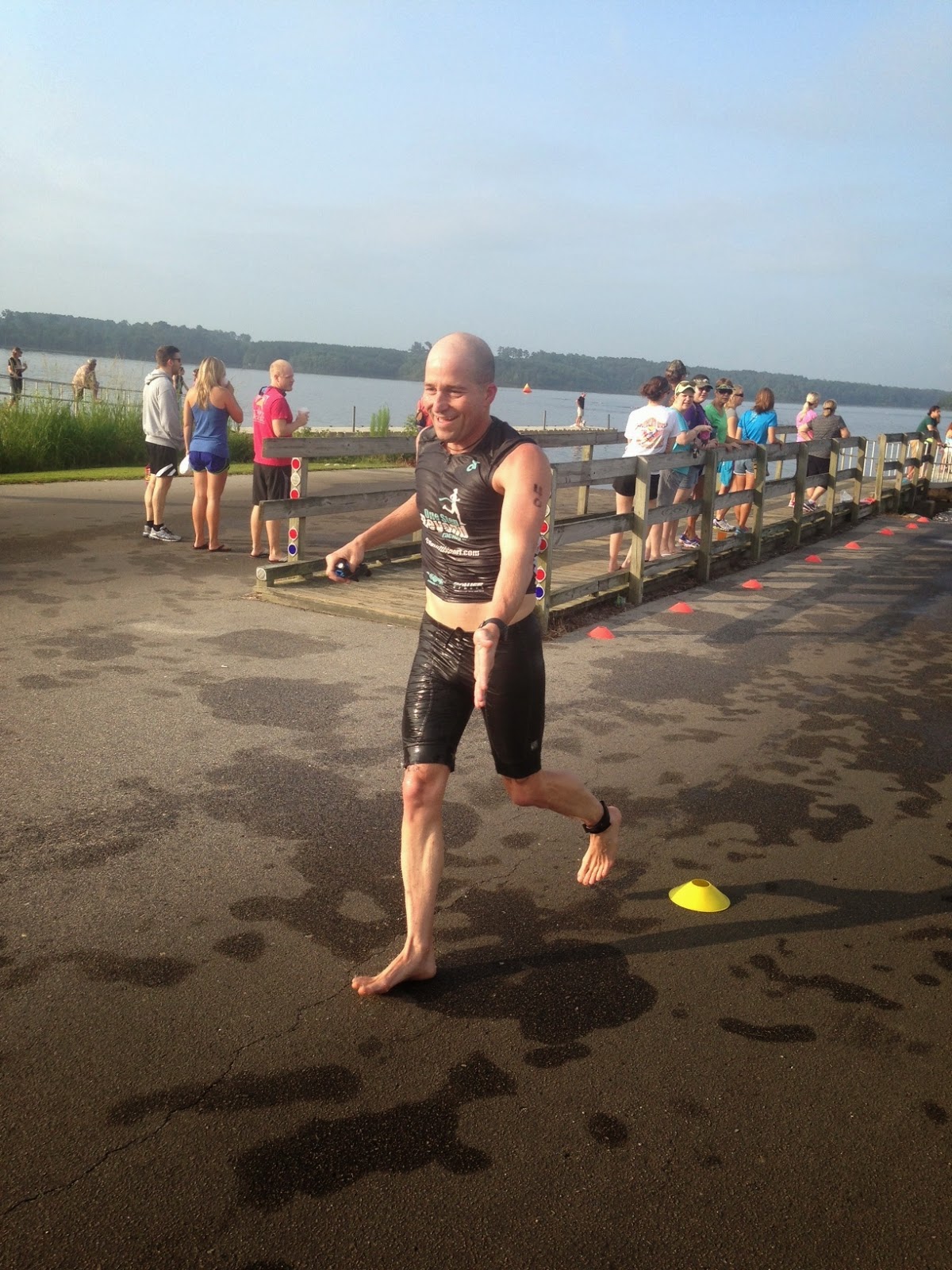 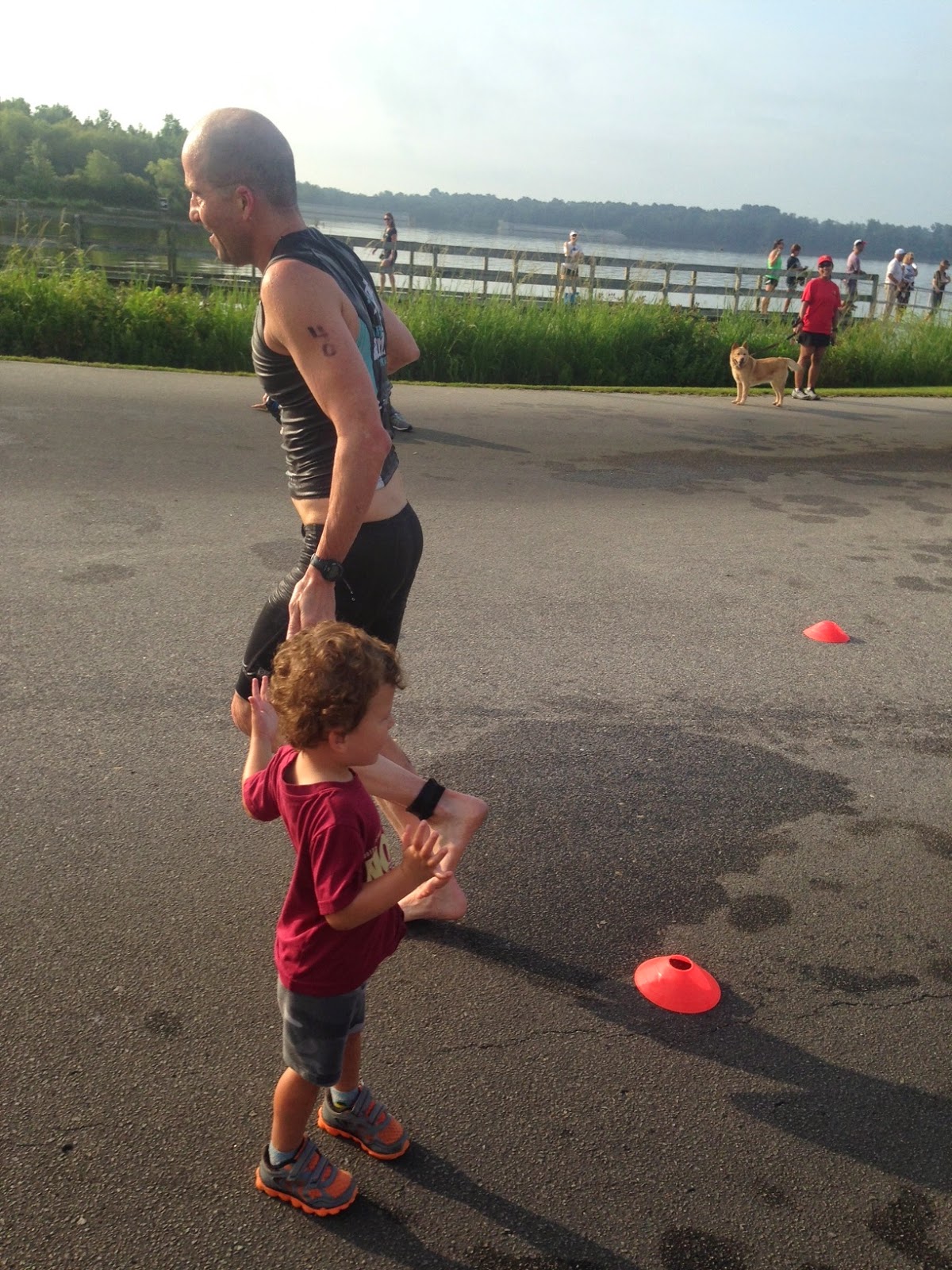 I was not the only one with a dedicated cheering squad: Momma Kasey had some fans in the house. 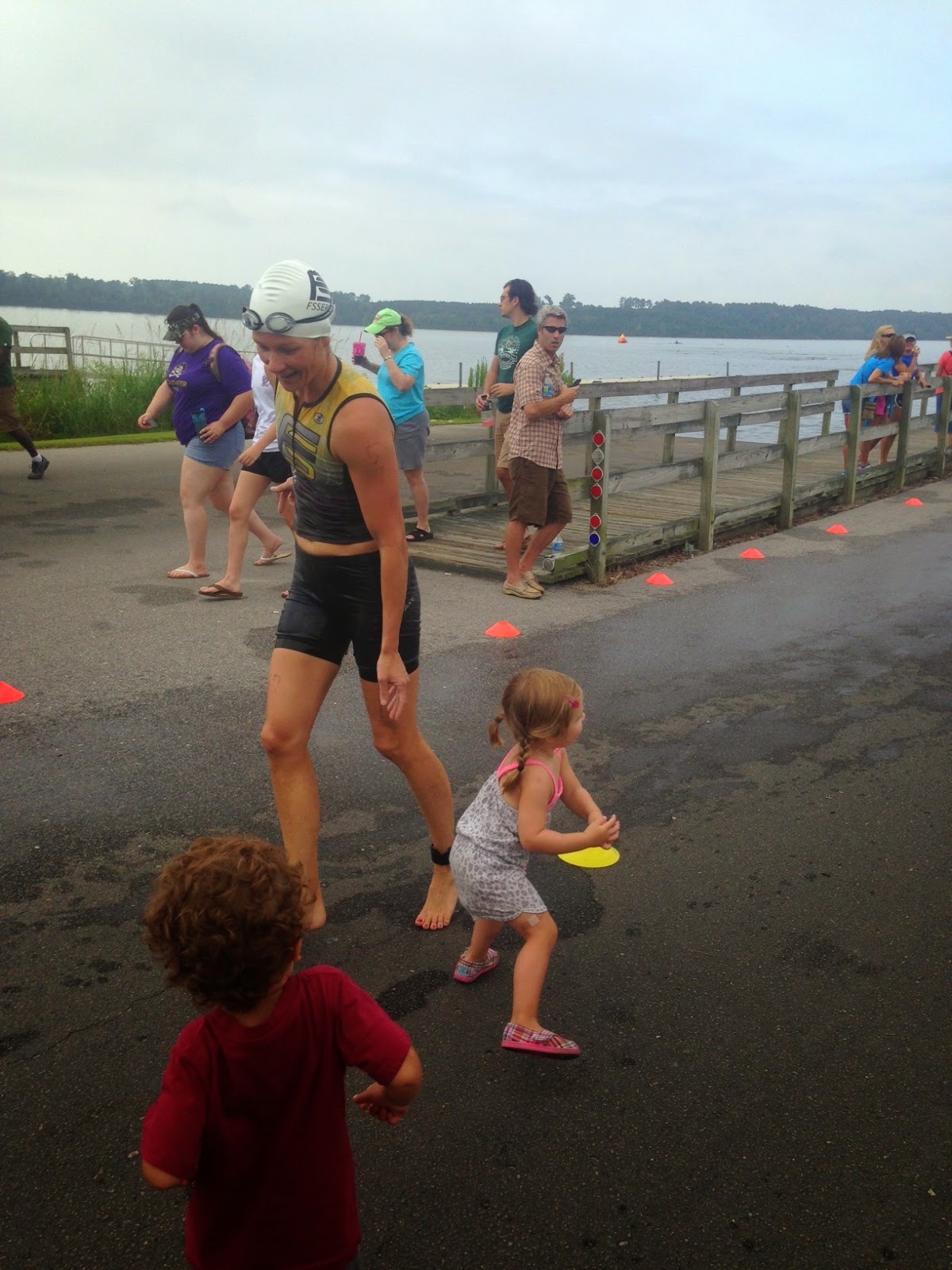 Out onto the bike I rode.  I don't know about you, but if you don't ride a lot and don't do some harder interval workouts along the way, you may not go as fast as you are otherwise capable of.  This is science-y type stuff and it makes my head wobble. But there you go. Four people people passed me.  I hated at them but they saw my hating and put up their deflector shields. 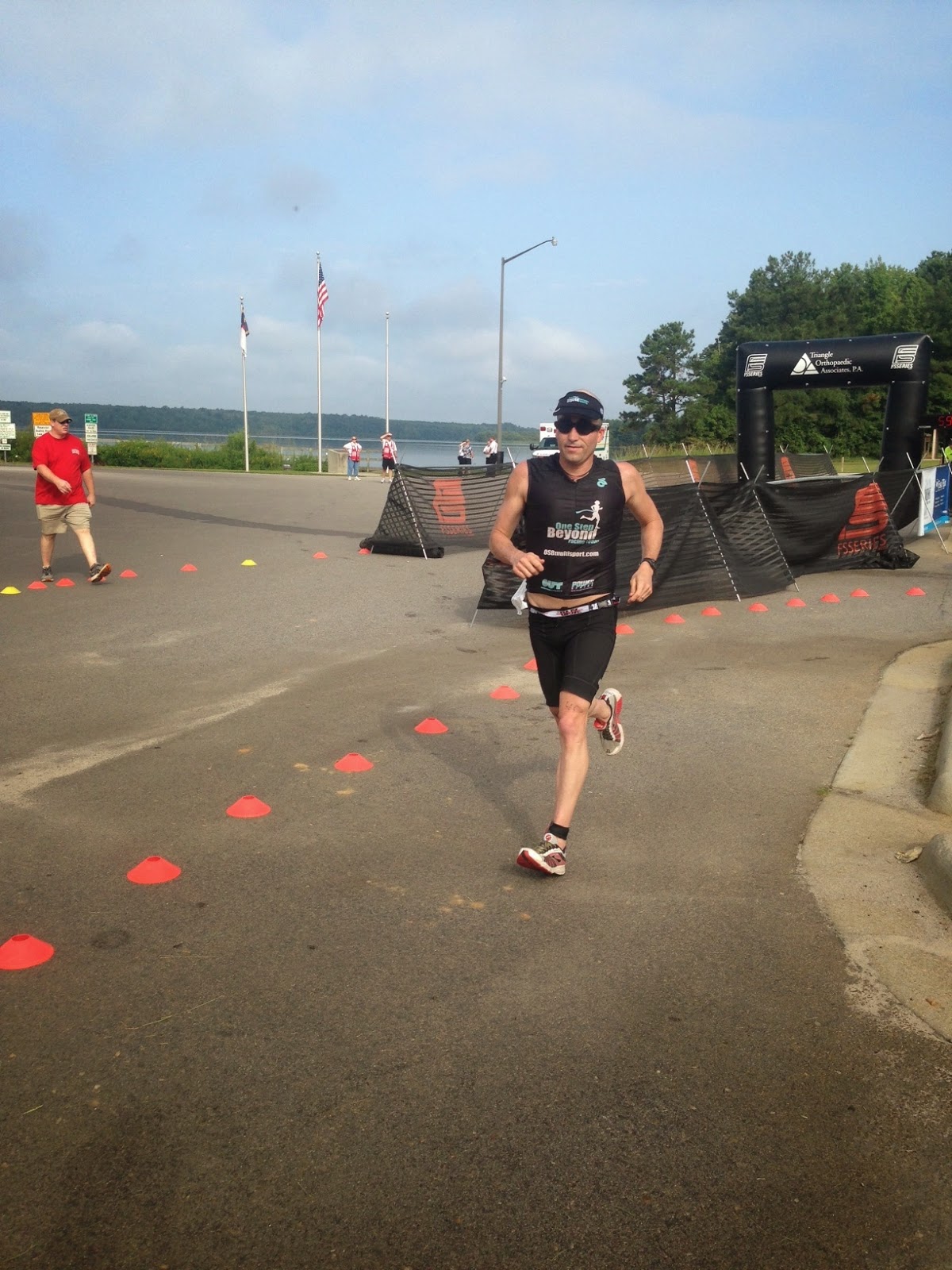 Fortunately, the bike does not last forever, though it is 17 miles and fairly hilly.  You're eventually allowed to get off and do some running.  Which I did.  I felt all right and held a decent pace and came in at 21:38 on a slightly long 5k course, virtually tying with long time competitor and buddy John Worden.  We wound up 7th and 8th overall (1st and 2nd masters) as a couple of age groupers got us by a handful of seconds. 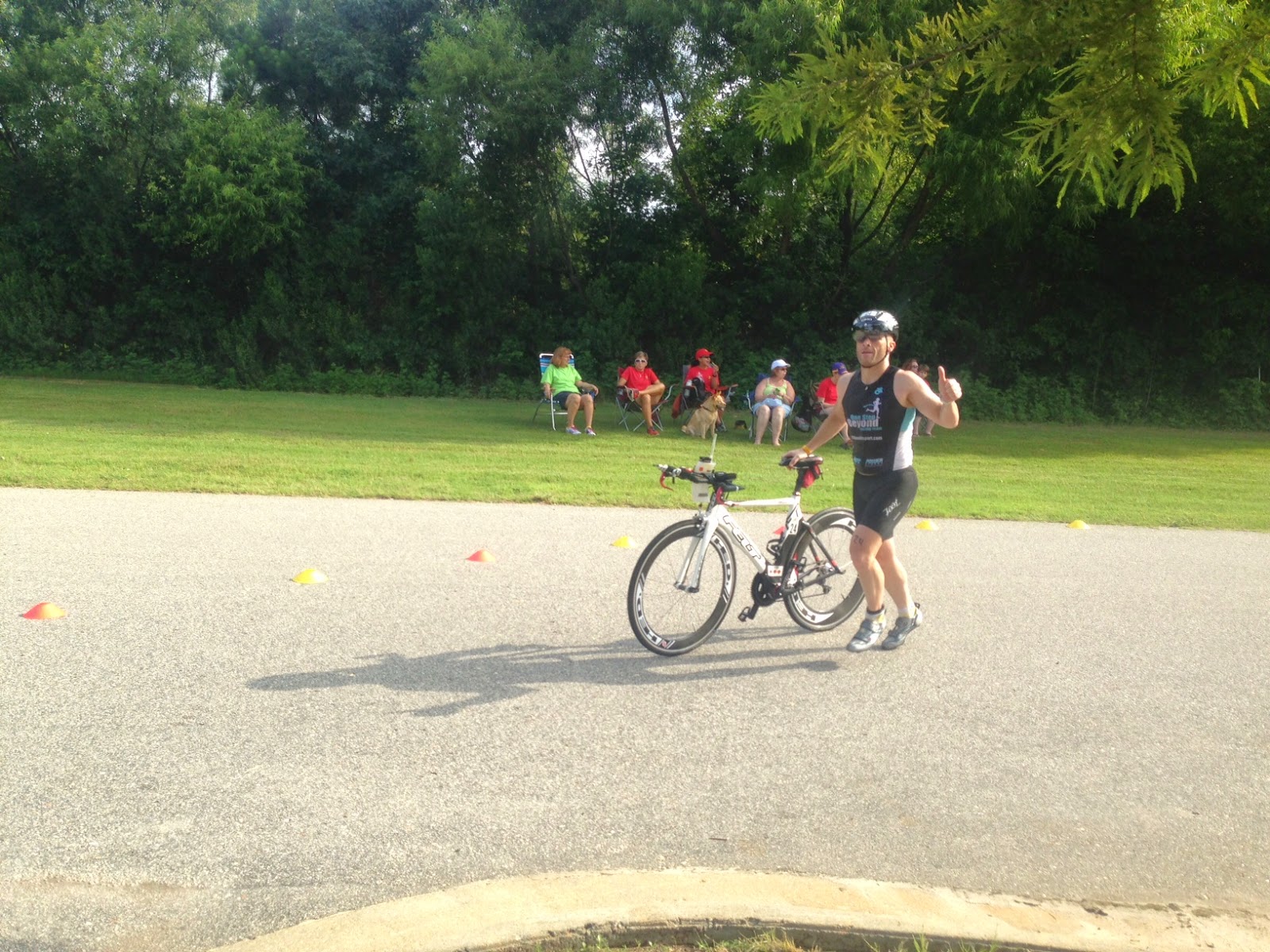 After the race, Junior snoozed hard in the car, then we all snoozed hard at home.  Battle at Buckhorn Triathlon is a great race and if you're nearby, you should join us in 2015.