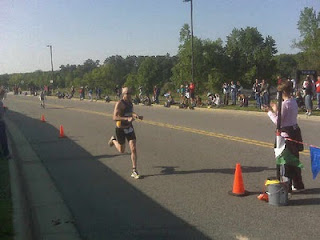 The race was a time trial start format. Several Wolfpack swimmers were in the house and they led off the swim. I went in 8th place. I felt good on the swim, in Lake Raleigh, and came out of the water in 5th place. Passed a couple more of the swimmers in T1 and then hit the hills on the bike. This bike course is very hilly and has several relatively steep climbs. After a couple of miles was in first place and pushed the pace as well as possible.

I think the hub in my Renn disc is starting to have issues, the disk is about 7 years old and it was making a lot of noise, but I don't think it slowed me down other than being distracted.

I came into T2 alone and headed out on the run. I have been running better than the past two seasons and felt good on all the flat sections. Again this course has some hills and my HR skyrockets running hills. At the halfway point I could see Dan was about 40 seconds down. He had started 2 spots behind me so it would be close.

The 2nd half of the run is mostly downhill, with a slight uphill finish. I pushed the downhills and survived the uphills, then sprinted in to the finish. My time was a minute faster than last year, which is great, and my run was sub 20:00, which is also great, as I did not break 20 last year on a triathlon 5k. My official split was 19:26.

After the results were tallied it showed that Dan had beat me by a mere 5 seconds. It would have been nice to win but when you do your best there is nothing too lose sleep over. I raced in a competitive series in Florida for several years as well as the NCTS and have been 2nd to 5th more times than I can count. I used to get worked up about this but now I am all zen monk and sh*t. Tassie and me being all zen

We had a lot of OSB athletes and friends in the house - it was a bit chilly at the start, but nice and sunny as the day went along.

After the race we went to Natty Greene's Brewpub in downtown Raleigh, a new local here in the Triangle area.

Next up is St. Anthony's Triathlon, where I plan to totally demolish at least half the field.
Posted by martygaal at 7:28 PM

Demolishing TNT'ers? Don't get caught in that hot water again!

Hope they at least decide to hold the swim this time. Good luck.

Nice race this past weekend too.

read this yesterday, and got a good chuckle out of it. I was too tired to post anything though.

Congrats, and wish you luck in demolishing at least half the field in whatever race that is coming up. Ha ha!!

Way to be all Zen like and shit too. It is your blog you can swear on it if you want. ;) Heck I just did.