Bri and I have both signed up for the Raleigh 70.3 coming to town next June.  About 50% of our athletes have also signed up for it.  It should be a good time.  This year I've managed to hold onto some fitness but it will be nice to really gear up for some racing next season.   Last Saturday I went riding with some of my very fit athletes and got blown off the back like a clingy ex-girlfriend.

Tonight we're going to do our first and probably only group ride of the season with the Inside-Out Sports crew.  I expect to get dropped, cramp, and barf.  What a difference a year makes.

A couple weeks ago I realized I was dying slowly from lack of and poor sleep so have undertaken Project Nappy Time.  This means I prioritize sleep.  Little Man is not a consistent through the night sleeper so something had to change, 5-6 hrs per 24 hours doesn't cut it for me.

Last race of the season is Wilmington YMCA sprint 9-22. I was 7th overall last season, but top 50 this year will be good.

Open water clinic on Sep 16 and one more in Wrightsville Beach on 9-23.

We had a nice evening in Ocean Isle Beach with some friends last weekend, here Junior and I ham it up for the camera. 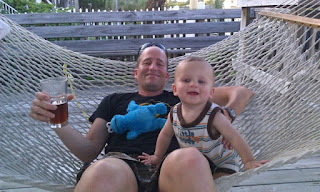