March has come and gone.  Like everything in life these days. It is whizzing by. Have a minute to breathe?  Let's throw something new at you. That's how it goes. Won't stop, can't stop. Wanna stop? Can't stop.

I made it to the Azalea sprint triathlon on March 12 this year.  Haven't done that one since 2010 or so. I had a bad case of the cold wets that year and scratched this one off my list. But the promise of cool skies and a day at the beach called to me.  Like a Siren. A siren screaming in my ear. My alarm, the siren. My ear, the screamy-into-thingy-of-the-Siren. F***ing useless prose, this is.

Anyway, I got up at 4am or some other nonsense to drive 2hrs to get this one in.  Bri asked me, "Why are you doing this, again?" And I said something along the lines of, "Well, I'm a triathlon coach, and we sponsor the series, and it might not be bad for me to show up at some events sometimes." To which she replied, "What time are you waking up, and what room are you sleeping in?"

I didn't resize that, on purpose. You go figure out the alt codes. I am all about cut and paste.

Yack yack yack. Swim short in pool.  38 degrees outside so I spent time bundling up. Cold short 9-ish mile bike. Run flat and not short. Felt good on run.  12th overall or so. The end. 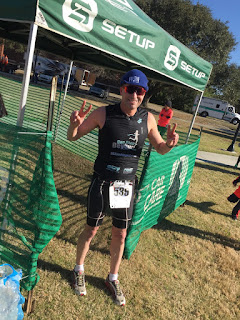 I was happy to get back to this race after many absences. As always there are some tough competitors and folks are ready to start up the new season.  It would have been nice to spend the day in Wilmington but we had much family fun stuff to do in the Triangle area. I don't recall what we did.

Fast forward a handful of weeks and we're coming up to my big spring race. The Wrightsville Beach half-marathon.  Where I would make a glorious and triumphant stab at breaking 1:30.  I haven't done that (break 1:30) in a long time, so why not.  But, that didn't happen.  My Mom got sick, so instead Junior Awesome and I drove to Florida to visit. And as you can imagine, while it's a serious trip, a trip with Junior Awesome also has to have some fun stuff.

So: Mom is doing OK, she is stable and recovering.  Thanks to the good surgeons, doctors and staff at ORMC. It was good to see her and let her know I care. I'll leave that there.

After we got into my sister's house, I realized that turning around and driving back in two days would be brutal.  So I looked online and discovered we were in town for the Winter Park 10k, hosted by Trackshack.  This is a big event and the site of my 10k PR from yesteryear. I signed up. I showed up. I raced!

Have you ever run a perfectly positive split race? I have. My Garmin doesn't lie. Here are the oh-so-gory details. Preamble: I was super duper happy to run a recent life PR in the 5k.

Junior, meanwhile had a nice time hanging out with his cousins and big, funny uncle. 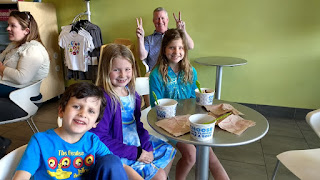 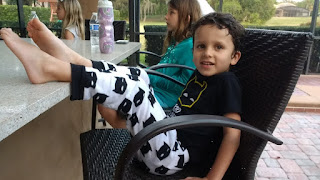 A nice breakfast with an old friend, a visit with Mom, and we packed up and headed to...dramatic pause...

The Daytona Speedway! Yes, Junior Awesome got to see, in person, the site of the Daytona 500.  And we had a moment with the Champions car. And spent an hour in their museum. It is well worth it, if you're a racing fan. And he is. So by extension, am I.  Had a good visit with an old college buddy who was displaying his classic car at a car show on site. Junior was psyched. 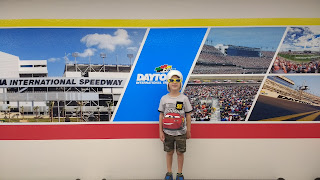 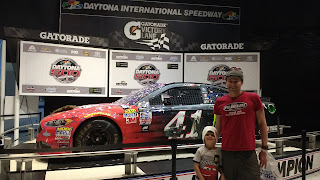 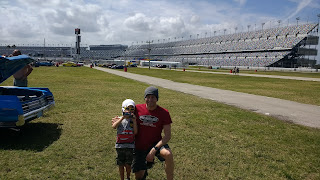 Then we drove to Savannah, GA and had a late dinner. 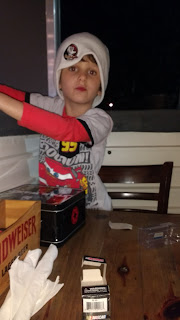 In the morning, we found a cool park in the morning (Lake Mayer park). They have a 1.6 mile trail with a rubber track around the lake there, check it out if you're traveling the east coast!  Got in a short run/bike ride and played played played.

Then we drove on home.

That's the end of this Captain's Log. Stardate whatever.  I found another half to do on Sunday, April 02 but I won't add pictures to this blog until till tomorrow, so I'll post that as a separate report.  Wow, two blog updates in close succession.