There are many stupid things to do in the world. One of them is running for a long time through difficult terrain using only your feets and your wits. So, that's what I did, in a dubious pre-50th birthday celebration called The Pilot Mountain to Hanging Rock 50k. October 02, 2021.

Let's start with the name. Traditionally the race is run from Pilot to Hanging Rock. But in 2021 the race course was reversed to avoid the supposed large crowds of sandal-toed tourists cruising through the beautiful trails of Hanging Rock on a Sunday afternoon.

The race is held mostly on singletrack, with a few stretches along the road or on bridle trails. Of the 50k, I'd say about 40 (k) is singletrack, but I could be off by a mile or two.

There is also a painful amount of elevation gain and loss. I don't know what you're used to running, but a local tough 10 mile course near me has about 800 feet of gain/loss.

This dopey endeavor had 3,700 feet of gain and 4,500 feet of loss. If you're a runner, you know what running downhill on tired legs feels like. So you don't need me to describe it. But you might just be some random hiker dude or chick that found this page so I'll explain it. It feels like an invisible gremlin is stabbing you in the quads with every step. So there's that.

I ran with a couple of friends, who for anonymity's sake I'll call Happy and Grumpy. They both trained for it pretty well. Happy had some back issues that threw him off, while Grumpy struggles in warmer conditions.

My preparation for this race was not bad. I didn't want to bang out huge long runs during the height of the summer heat, so I delayed a real long buildup until August. And I cheated in how I increased my weekly mileage. Traditionally it's not advisable to add more than 10% or so to your long run distance or your total weekly mileage. Since I'm special, the royal Me ignored these rules and jumped a fair bit week to week. I already forgot most details, but my long run distances went something like 11 - 13 - 16 - 18 - 20. With a downweek or two in there somewhere.  If you're really interested you can follow me on Strava. Don't forget to hit the like and subscribe button either.

The other neat trick I added was to follow up the long runs with another run the following day, instead of the usual triathlete plan of a long ride or a day off, depending on who/when/what you do. My longest session thus wound up being a 20 miler on Saturday followed by 8.5 on Sunday.

Anyway blah blah blah I also swam and biked and did strength and yoga and was overall in pretty good condition. Happy and Grumpy both had more running miles in them but I probably had more overall training volume.

So then we started the race. Or kind of. There were about 200 people doing the event. 180 of them lined up and took off at the start. We and a few others waited a couple minutes to let it clear out. Then we started.

Now, if you're smart, you go and review the race course so you know what to expect. We did not because we are not smart, so imagine our surprise when we hit an extremely tight singletrack section a half mile in. And then we walked! For almost 2 miles, it was too tight to pass anyone and the few slower runner/hikers that had started immediately just shut down our game. 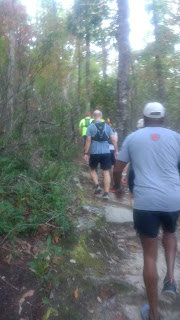 Grumpy trying to run in a crowd

But soon enough there was room to pass and we started running. Happy got frustrated and started leapfrogging people, while Grumpy and myself cruised together for a few more miles. I eventually pulled away and a 2-3 mile stretch of highway running.

Then it became a matter of pacing and just being careful with the steps. It was very scenic, and the temperature for the first 2/3 of the race was comfortable. 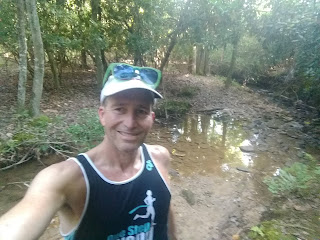 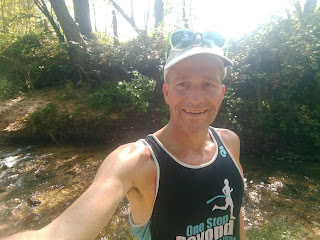 I ran with my phone so my many fans around the world could track my progress using a program the race provided. They could send me movie quotes and other clips to keep me motivated. That was a fun way of knowing someone out there cared.
Here are the 10, 20, and 30 mile video updates.
https://youtu.be/OtUCxghPSDQ
https://youtu.be/VARDG2kX-bM
https://youtu.be/2pFLz2VbD6w 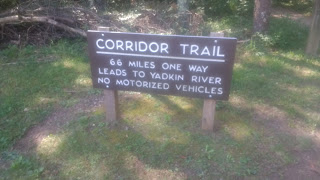 Notice the up and downy-ness

There was very little in the way of flat running. Around mile 21 we entered the Pilot Mountain trails, which were nice, but my legs were really hurting. I took an Aleve at 23, and by 25 the pain was cut in half, which I always find amazing. So that definitely helped me keep a mostly running/jogging form through the finish.
No problems with nutrition. I ate a lot of caffeinated Gus and high salt Clif Bloks. Started with Gatorade Endurance and then switched to whatever electrolyte drink they had on the course.
The last 10k started to get warm, but in the shade of the trails it didn't bother me, and having been on top of the nutrition /hydration no problems. My pace through these was a little slower than I would have liked, but it was a balance between quad pain and general fatigue to keep going.
Yay, then I finished!  Happy had ran well and finished ~20 min before me. I wound up in 6:17 and some change and was 14th OA and 3rd in my AG. So throughout the run I passed ~160 or so runners/hikers walkers. The only ones that passed me were a handful of the fast psycho 50 miler runners, who were weaving on and off our 50k course. 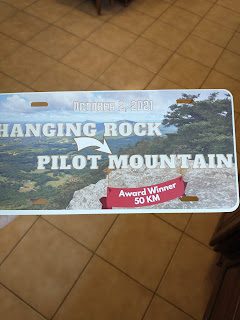 Grumpy had a rough finish with some overheating but hung tough to the finish line.
So if you like running, trails, and suffering, this ultrarun might be just for you.  I'm definitely a one and done type with anything over a marathon. 10 mile trail runs are great. 50k is definitely more of an endeavor.
I took my time with recovery. As of the writing of this amazing blog, it's been 8 days. I swam easy 4x during the week but no running. I'm going to run-walk 2-3 miles tomorrow.  My legs were very sore, my knees were achy, and some ancillary muscles that almost never get sore are still sore now.
And that's your exciting recap. Until next time!
Posted by martygaal at 7:43 PM