July has been a good month for racing here at OSB headquarters.

Early on July 20 one of our super babysitters got to the house at 5AM so we could head up to the Burlington area to race in the Mission Man triathlon.  We'd heard great things about it but never had the chance to go for various reasons.  It is a great venue and race.

Neither of us were feeling particularly well rested after something of a strenuous week, but we enjoyed our Saturday morning date. 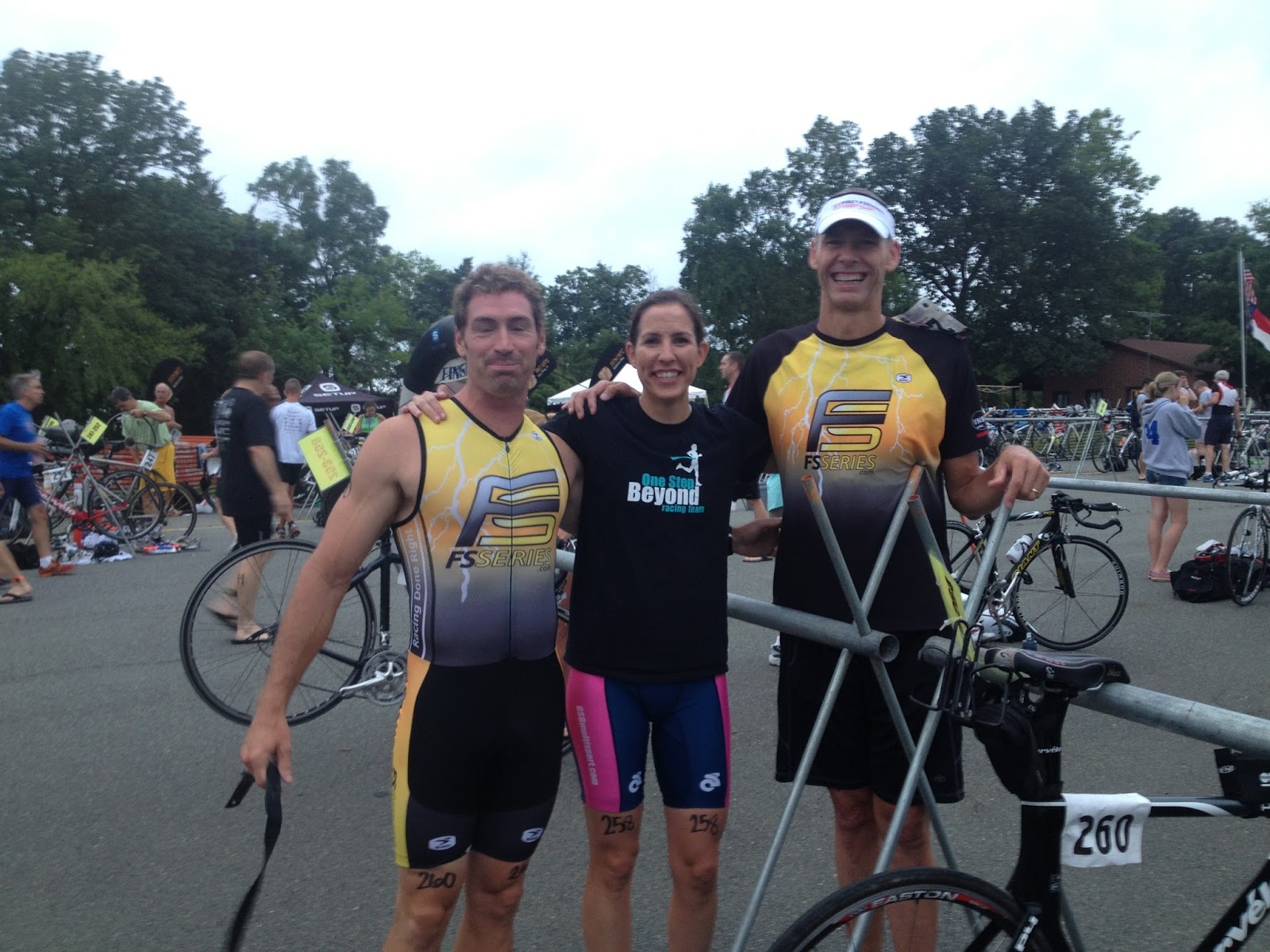 Bri and the FS Series contingent 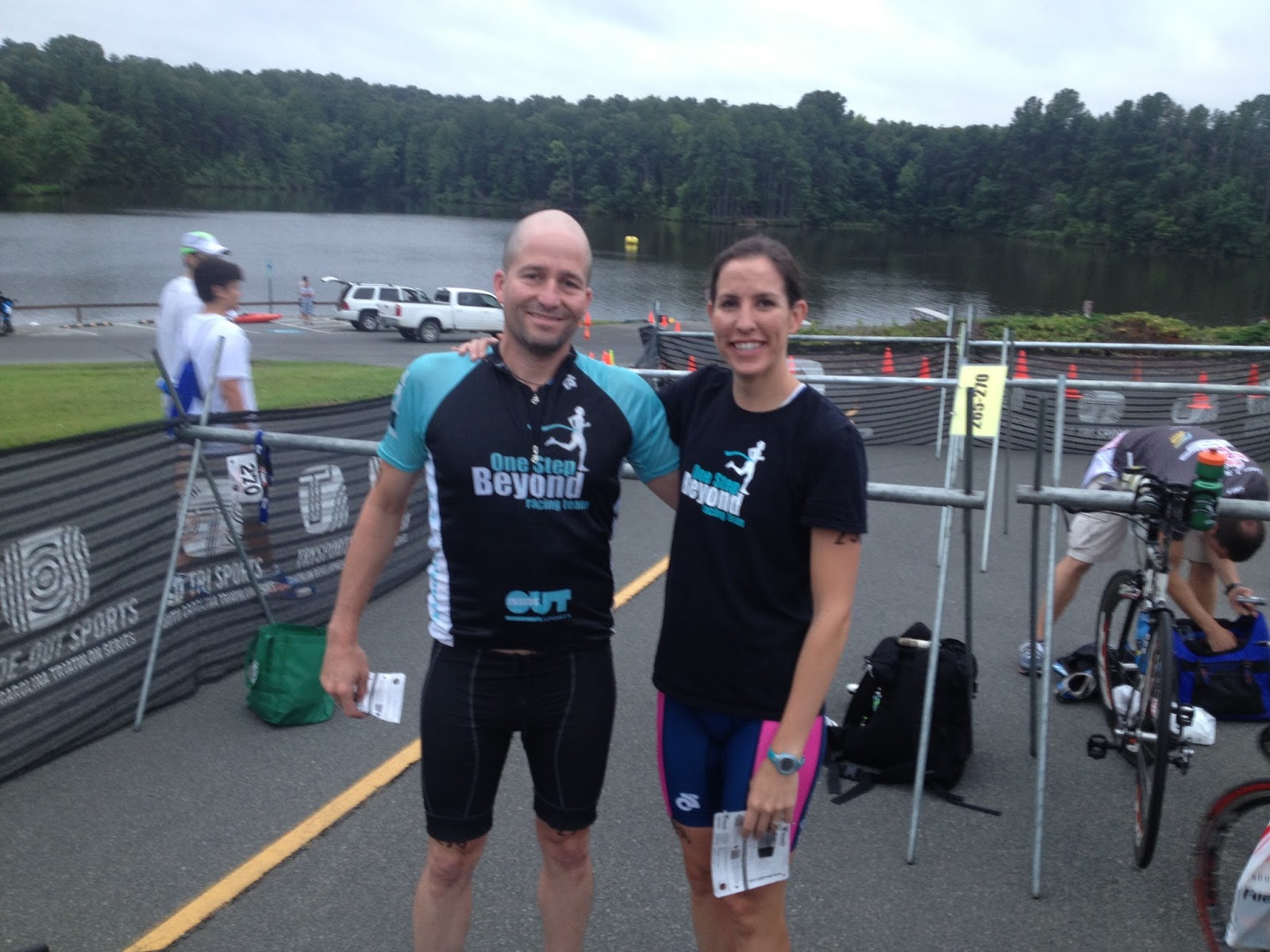 Bri and Your Humble Narrator, The Royal We

I have not had the time or desire to train like I did in the old days, and have been gracefully adjusting my expectations and goals.  It can be a little hard at times to confront the reality of not being as quick or spry as We used to be, but with some slices of humble pie and a little bit of grace, We make do.  Focus on the fun and fitness!

Bri did great as usual, taking 2nd OA to some fast young Yankee from up north.

I also did well, finishing 10th OA (also behind the fast girl) with a good race across the board.  I Powerstroked (shameless plug) my way to first place on the swim then went backwards from there. :P

We finished the morning with a breakfast date at Denny's on the way home.

Sunday July 21 we hosted the Little Uno and Big Deuce open water swims.  Had a great turnout with 200+ swimmers.  Our major concern with these is swimmer safety, everything else is secondary.  We always buy 50-75% extra t-shirts and almost always come up short as a ton of folks sign up late.   Anyway, the swims went well, you can see a bunch of pictures on the Triangle Open Water Series Facebook page. 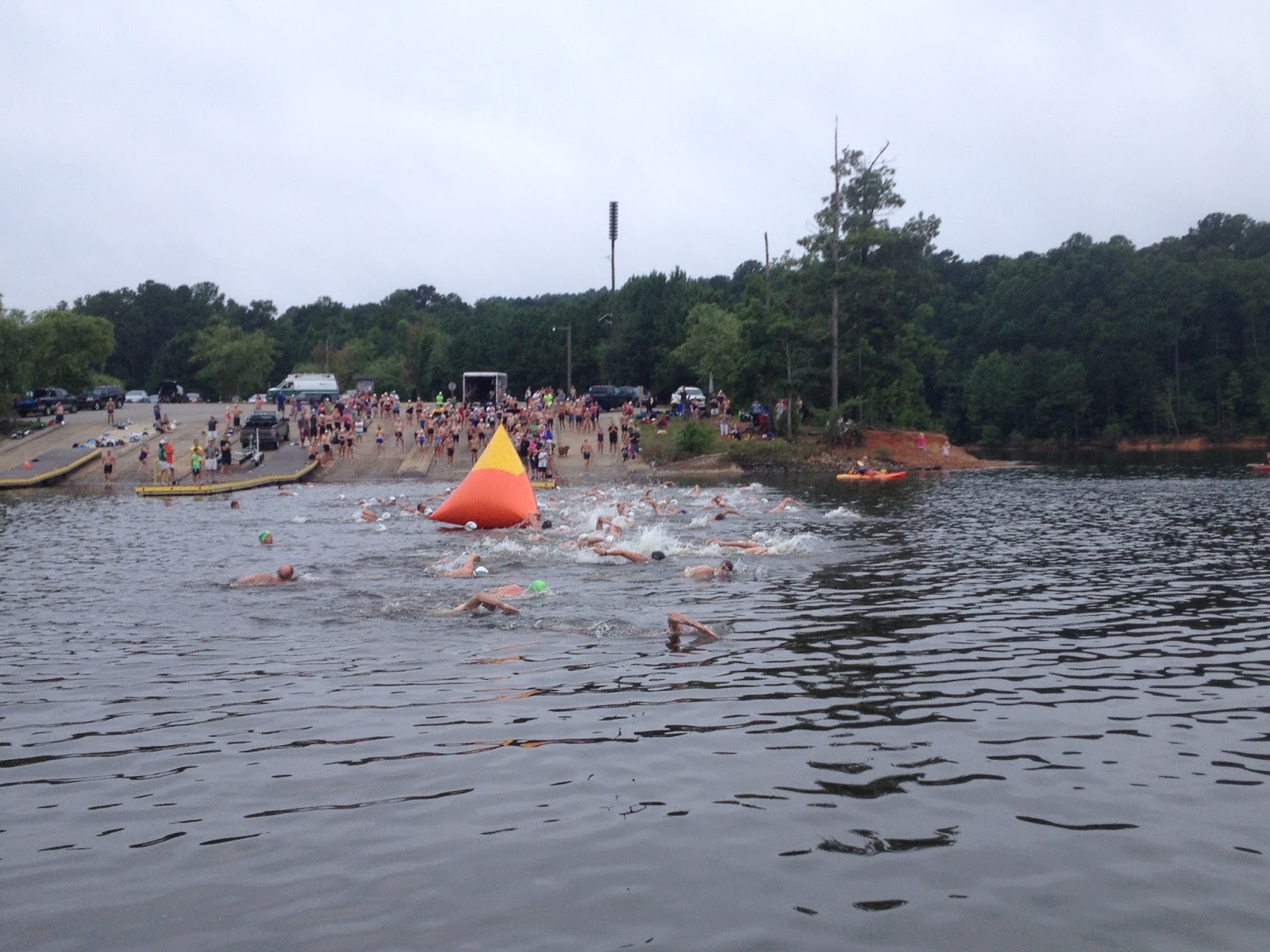 Onto this weekend, we signed up for the Cary Roundabout 5k here in our adopted hometown.  It was close enough for us to jog to the start, which we did.  Bri did great again, taking another 2nd OA in 19:04 which is jamming.  Junior Awesome and I also had a solid run, hitting 20:46 and scoring 3rd in our age group.  Afterwards we hung out and cheered on other runners. 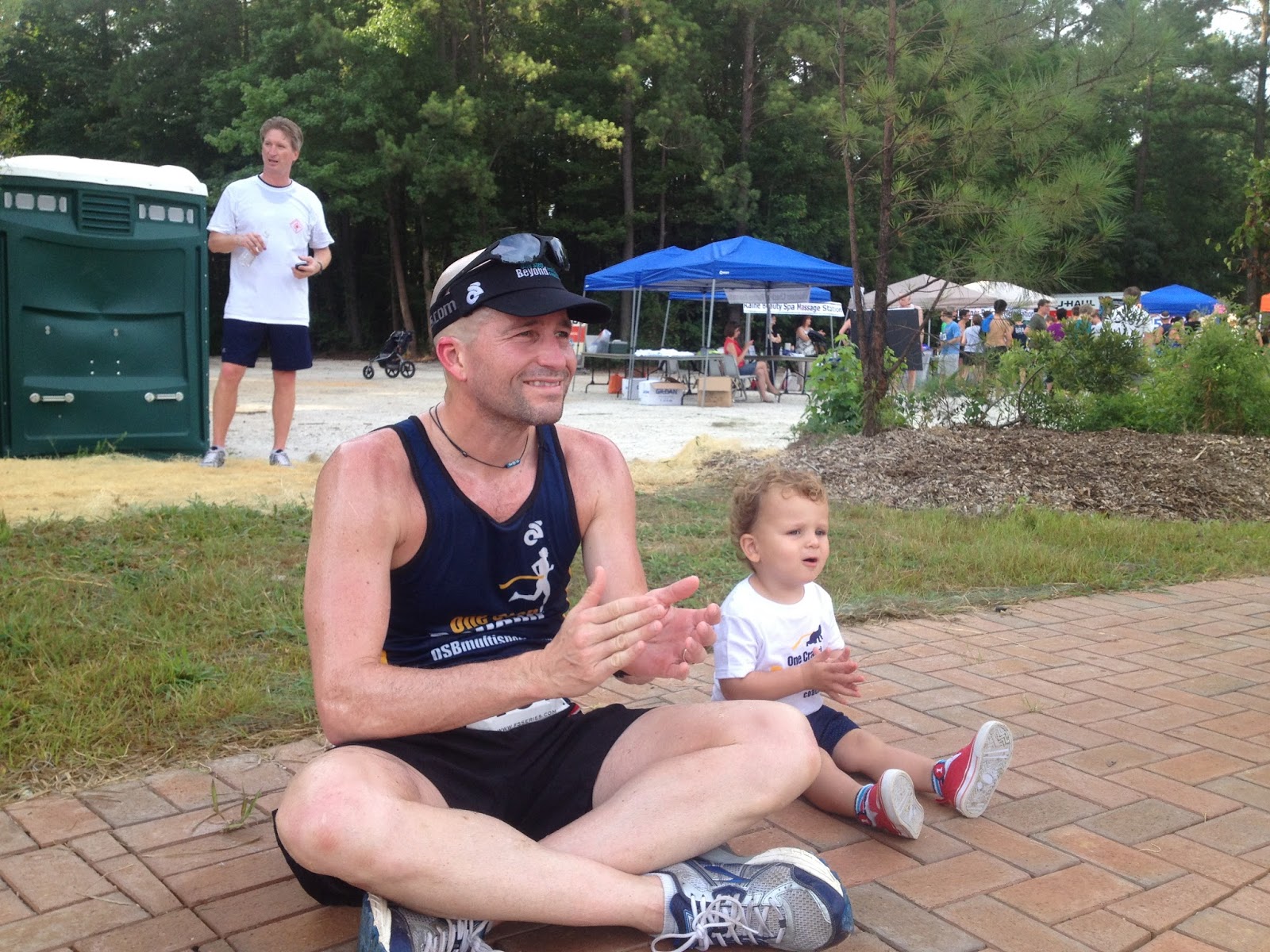 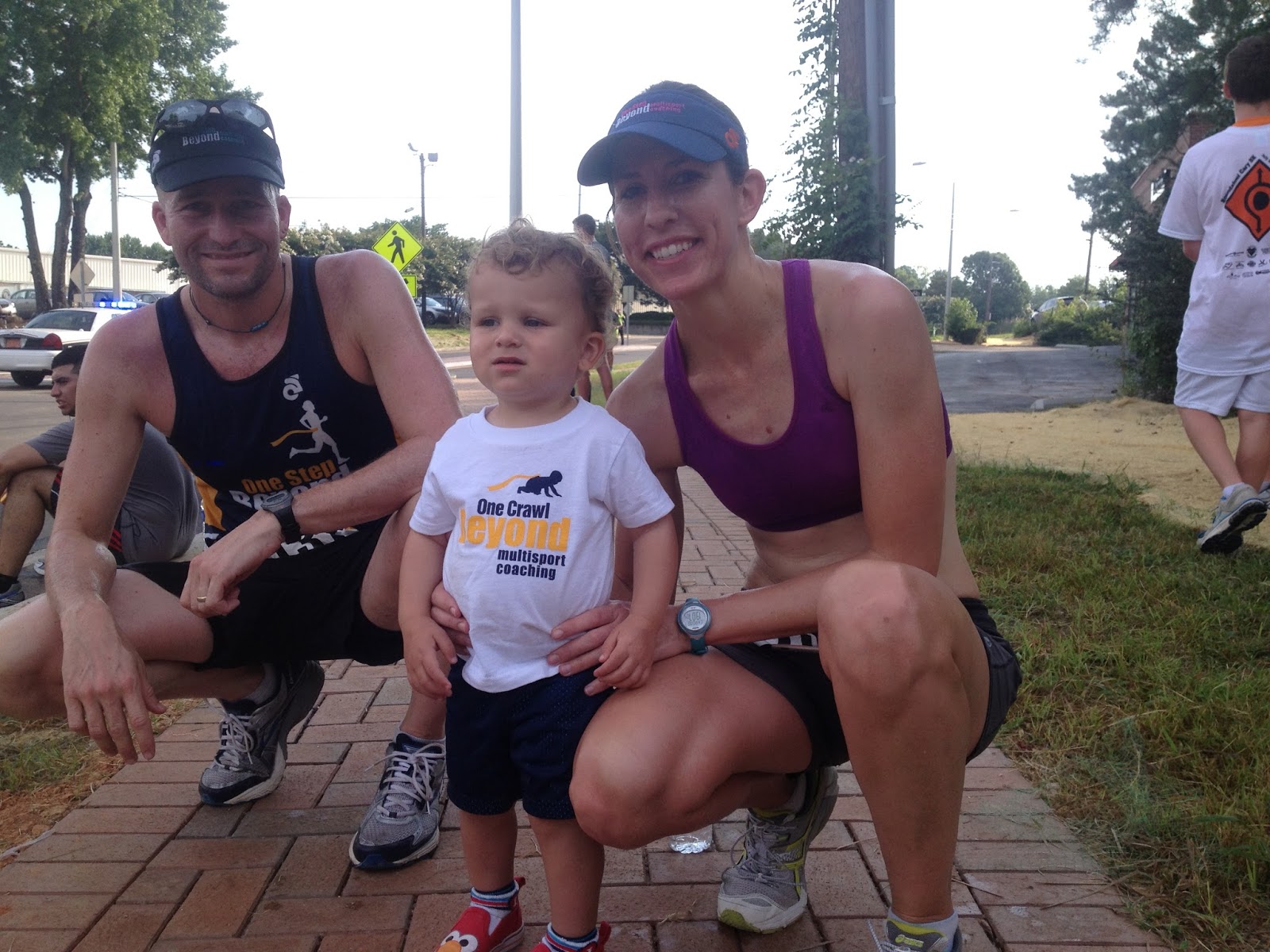 On the way home we had a tire blowout on the stroller which scared everyone but Junior, who was like, "whatever dude, keep running!"

Next weekend we're off for a quick trip to the Asheville area to race at the Lake Logan Multisport Festival.  Bri will do the olympic distance race and I've opted for the Aquathon on Sunday, which is the USAT Aquathon National Championship.  The past couple years have seen a low turnout so I was hoping to poach some dubious bragging rights with an age group placing at 'Nationals'.  But, there are 100 or so people signed up so it's not a total cakewalk this year.