For the most part I am of the opinion that if you manage to win an event, you should return the following year to defend your title. It's not always possible, but it's good sportsmanship and adds a bit of extra spice to your race. I was able to do that this year at the Battle of Buckhorn Triathlon out in Sims, NC. Sims is about 1 hour away from Cary and the Buckhorn reservoir is a good place to have a triathlon.

On that note, I would go back to Wood Lake Triathlon coming up on May 29, but Bri and her team are doing the Doughman Quadrathlon relay in Durham, NC, and I need to be there to provide team support and take pictures of the ladies in their provocative outfits (their name is Team Victorious Secret and they will be running around in some eye-popping clothes). The Doughman is a fun exercise/food event that raises money for charity.

I have been feeling pretty good in training and planned to do my darndest to defend the title from 2009. The prize is a custom made belt buckle, which is a cool award as far as these things go (besides a bag of gold krugerrands, or diamonds, or a priceless work of art).

I won't bore you with all the details but I did have a solid race across the board, coming in first in the 1000 meter swim with a two minute lead, holding onto the lead on the 17 mile bike by about a minute, and then held it together on the 5k run with a 19:56 and the win by 30 seconds. I had to keep reminding myself that no one would give me the race; I had to work hard as heck today to win it. I improved my time from last year by 3.5 minutes all told, 2:00 on the bike (less wind and in better shape), 1:20 on the swim (it was wetsuit legal and slightly shorter this year) and 10 seconds on the run (not quite as pudgy ;) ).

There were a ton of NC based young guns aiming after the prize, as well as a couple other veterans (USAT 39, 39 and 37 year olds here) who rounded out top 3. 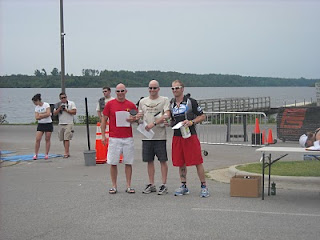 Here is a picture of one of the walls in Bri's high school gymnasium. 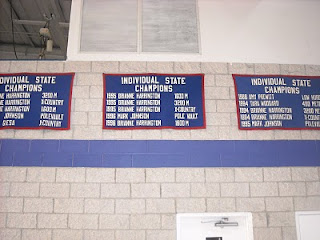 Any time you think you're bad, just remember someone in your house is probably better than you.
Posted by martygaal at 5:26 PM

Congrats on the win. You had a great race.