Started in the 4th wave nine minutes behind the first wave, which gave me enough time to see the strength of the current in the James River.  I shot way right (into the current) and hit the turn buoy as well as humanly possible.  The current was ripping 2-3 knots which is a lot when you have to swim into it.  Also compensated coming in by swimming upstream/angled and probably had one of the fastest swim splits on the day if not the fastest - I was the 9th person out of the water. 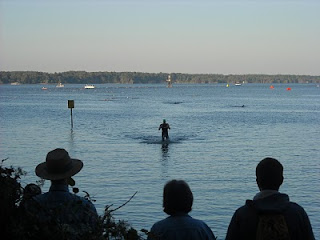 Swim exit
The bike went very well - a fast guy passed me a couple miles into it and I targeted him for 15 miles, when he found another gear and just started hammering like mad.  I rode my own race for the remainder holding 21-24mph depending on the grade.  The race is advertised as flat but that is bunk (I grew up in coastal FL) - it is modestly rolling and false-flat 90% of the way.  High cadence riding and finished feeling good.  Off the bike I was 4th onto the course. 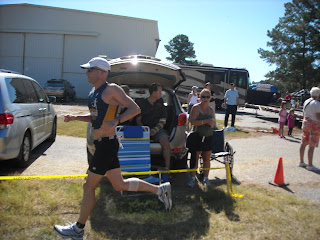 Running with actual good running form
Run: started out around 7minute pace with a tight back that slowly released and I found my happy place in the 7-720 range.  I am not a light-footed runner, so the 3 miles of singletrack dirt trails on each loop were very welcome.  No problems until I started slowing down at mile 9 - effort was as high or higher than at the beginning of the run but the body just started shortening up (my run volume has not been high).  Miles 10-11 were the slowest just under 8 min/mile pace, then I ran with my arms for the remainder and finished strong.  Good nutrition / hydration on a coolish day so all was well on that front.  Four people passed me during the run which is acceptable on a long run like this. 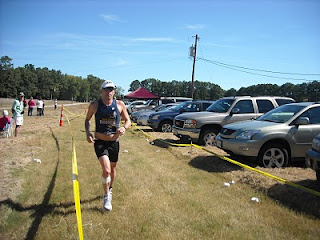 Here I am coming in for a mid-run kiss from my wife.

We had a fun time hanging out with OSB athletes/Raleigh gang at Hooters later that evening and I repacked every calorie I burned between wings and beer. 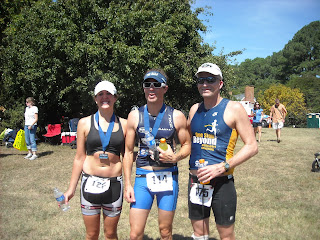 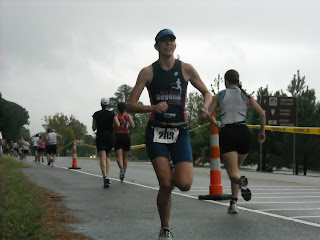 The Bri-anator
The races are in a great venue at the Jamestown Settlement, so put this one on your calendar if you are in the mood for a trip to Williamsburg, VA.  It is a really nice town.

I would end my season here but am already signed up for USAT Nationals in Alabama, so will coast-train a few more days.  Looking for a top five AG there and then hang the bike on the wall for a couple of months.
Posted by martygaal at 8:44 PM

Congrats on a great race Marty!! I really thought of doing that race this year but the Rev3 was a lot closer for us. I'll have to put Patriot's on my schedule next year. Oh and you did have the fastest swim split...but a lot! :) Great race!

Beth, thanks, high praise coming from you - I heard you ruled Rev3! Glad it went well, enjoy the lead up to Hawaii.